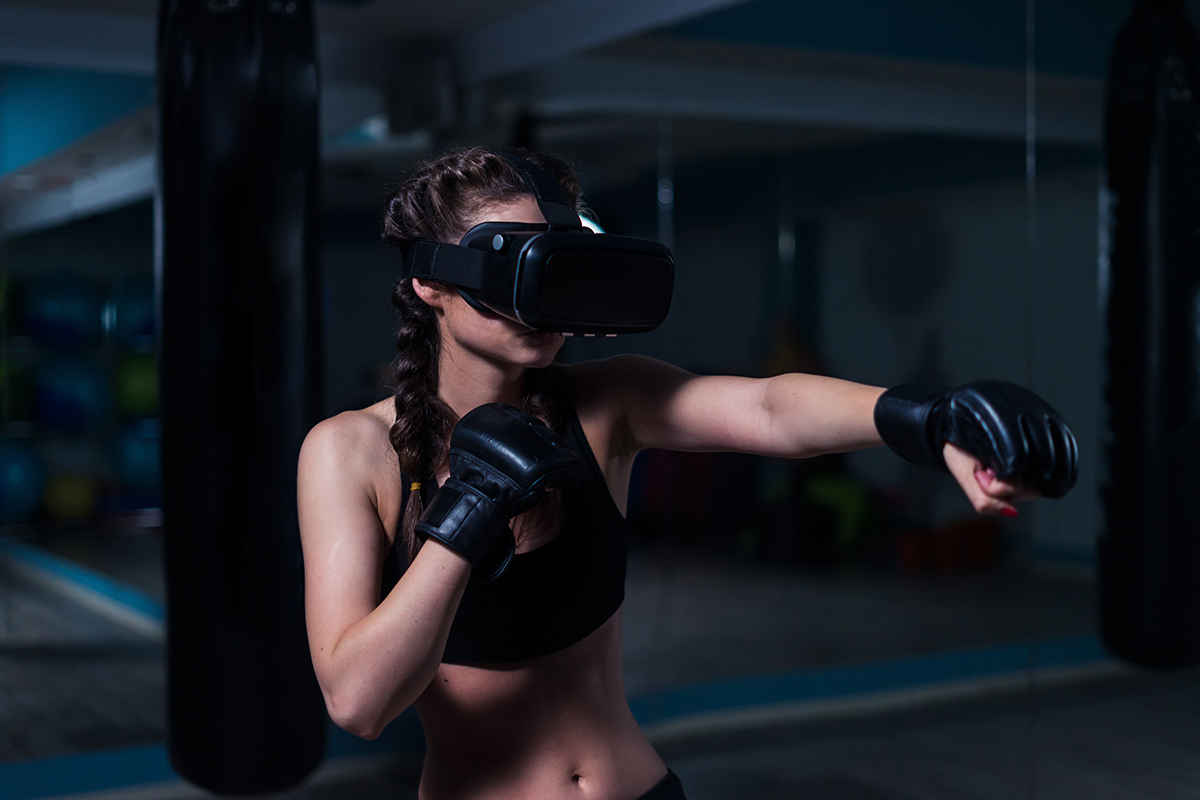 What the fitness industry can learn from playing games.

George Cuevas, VP of Innovation at SweatWorks, looks to the gaming industry to consider how technology, connectivity, VR and other gaming advances could be applied to the fitness experience.

Gaming is big business – valued at over $173 billion in 2020 the global gaming market is almost twice as big as the fitness industry, at $97 billion. While at first the two sectors may seem incomparable, the technology that informs them is inextricably interlinked. And while investors are ploughing money into its advancement, there is much to learn by paying attention to games and how they successfully create community, experience high retention rates, enjoy massive user engagement and loyalty while opening doors for end users to monetize their own experience. .

We’re not talking 8-bit graphic games like Mario Kart anymore… gaming tech now creates worlds within worlds, enhanced by augmented reality and played in virtual reality. Players can fully immerse within a narrative, and utilise haptic touch technology to physically interact and respond with the game. Gaming today has more to do with fitness than ever before as players move, compete and challenge themselves and each other to improve and meet personal goals.

The games sector doesn’t pretend to be the fitness sector, of course. With the exception of Nintendo’s Wii Fit – the first of its kind console that encouraged you to move more with the use of its motion-sensitive controller – games remain predominantly games. But technology such as this can influence the fitness world, stretching the connection between the two sectors far beyond the ‘gamification’ concept implemented widely already in the fitness sector.

Wii Fit and the application of motion-sensitive control

The success of Wii Fit in turning exercise into entertainment was a result of Nintendo’s innovative motion-sensitive controllers. The hand-held controllers were, for the first time, able to detect the up, down, left, right, and acceleration/deceleration of its users’ motions using solid-state accelerometers. This technology revolutionised the game controller, from the typical two-handed controller we were all used to, to one where the whole body could now be in play through just one hand. This made its application for fitness-based games possible. It also provided the fitness industry with the opportunity to apply this technology in wearables.

In fact, most wearable devices incorporate a multi-axis solid-state accelerometer, which measures acceleration in multiple directions. It’s what gives us our step count and supports the calculation of estimated energy outputs. Accelerometers can also be used to improve aptitude in certain sports – to help golfers or tennis players improve their swing, for example, or boxers to measure their impact.

So, if the technology in game controllers has already influenced the fitness industry, what is happening with controllers now that could influence our fitness futures?

Haptic technology and the experience of touch

One of the most significant developments in controller tech in the last few years is haptic touch technology, creating an experience of touch by applying forces, vibrations, or motions back to the user. Controllers are no longer passive – they’re actively creating experiences for their users. In gaming, haptic touch technology allows the user to feel when they receive a blow, or drive over a bump, or shoot a gun, deepening the player’s immersion in the game. Applied to fitness, haptic technology could deepen fitness enthusiasts’ health experience either in the gym or at home.

It already does in some respects. Wearable tech can detect inactivity, prompting you into action with a vibration – your step counter is calling you! But we’re still really only scratching the surface of what wearables could achieve with haptic technology.

More sophisticated advancements could see wearable tech detect inefficiencies in technique, prompting you to deepen your squat, level out your deadlift or stretch out your gait, for example. Or imagine a full-body suit that could detect muscular weakness and send you, via haptic vibrations, warning signals to make adjustments to your form.

Immersion and the fitness experience

In the gaming world, haptic technology is used as a form of immersion, by creating responses that are more true-to-life. Immersion is a trick of the senses, allowing you to see, feel and hear another reality. So how could this be applied in the fitness world?

Here’s one simple example: Imagine treadmills with truly adaptive treads that change the running ‘surface’ in any programmed route – taking you from forest to road with real feel haptic technology, perhaps vibrating to represent a loose gravely surface or stiffening to put you back on hard pavement. Add another commonly-used gaming technology, virtual reality, to the same scenario. You can now feel the route physically and experience the route audibly and visually through a VR headset.

Now add another layer of gaming technology – eye tracking. Imagine as you run on your haptic treadmill, immersed in VR, then being able to change your programmed route based on where you look, essentially using eye motion to direct and adapt your route as you see fit. Come to a fork in the road? Look which way you want to go and the adventure continues. Feeling good? Take the uphill route. Feeling wiped out and need to take it easier? Take the downhill route. Add in voice recognition and you can activate your device profile, make modifications to your route on the go, select to run in the mountains, forests, desert etcetera just by giving vocal instructions.

By connecting via the Cloud, you could even choose to connect to a friend’s route and run together in real-time, interacting with each other through gesture recognition – swipe the playlist song towards the runner and now you’re sharing the playlist and running to the same song, for example. Tap your friends’ avatar shoulder on screen and send an audio message as he hears you running past him!

Is this space-age stuff? Possibly. But the technology to make it possible already exists, and is already in use in its separate components. But the challenge with total immersion is mass appeal and affordability at scale.

Fitness in the Cloud

As at-home fitness grows, the opportunity to improve fitness for the masses is vast and affordability becomes paramount. One thing the gaming sector excels at on this level is connectivity. Enter the Cloud. Widely used by games companies, Cloud technology expands the reach of games, builds communities and encourages competition. Cloud applications release gamers from the need for more expensive hardware, creating an affordable gaming solution for the masses. Players connect with other players across games and use real-time leader boards as motivation.

This technology has already been applied widely within the fitness industry, through the likes of Peloton whose 24/7 online live classes, live fitness tracking and leader boards have built a worldwide community from an initially cult following. With the foresight of innovation, Peloton’s profits were propelled into the stratosphere during the pandemic. Zwift too has brought gamification of cycling and running to the masses.  Under the tagline ‘fun is fast’, Zwift blends the interaction of video games with training through real-time races with real people across the world, delivered in a virtual interface on your AppleTV, iPad or laptop. Yet this technology remains niche and primed for an elite audience. How do we bring the benefits of this kind of technology to everyone?

One relatively untapped potential of Cloud technology, is the use of data to incentivise, and wearable technology has a big part to play here too. The Cloud allows users to connect, store their vital stats and usage data and compare and contrast with previous performances, but what if this was then connected to reward systems, enticing and encouraging people to profit from their activity. UK insurance provider Vitality is an example. They actually reward those they insure for being fitter, tracking their progress with wearables in a win-win partnership between the insurer and the insured – the customer gets fitter, the insurer pays out less in the long run. The potential to expand this rewards system more widely within the fitness sector is great – discounts on hardware, ‘power-ups’ on fitness subscriptions, free virtual personal training sessions…you get the idea.

Let’s not leave out “personalization”. One of the biggest buzz words in the fitness industry does not even come close to what it means in the gaming world. In fitness it means a personal profile with your stats in it or maybe, if some form of AI is involved, ‘recommendations’. In gaming, most of the experience is manipulated by the gamer. From communication with other users, to how the game behaves, looks and responds. From adding devices to improve play – like upgrading controllers, headsets with mics, chairs for more comfort – all the way to sharing your screen gameplay (with gamer video commentary) to a private video channel that is monetized by a subscribed audience! That is personalization at it’s best.

It’s clear there is great potential to learn from developments in the gaming sector as it expands and advances. SweatWorks continues to be inspired in our mission to deliver wellness for all. Watch this space as we share thoughts and findings from our own digital fitness lab.

Subscribe and receive news about the fitness industry, technology, and innovation.